X
This site uses cookies to provide and improve your shopping experience. If you want to benefit from this improved service, please opt-in.
For more information, please see our Cookies Page.
More Info
Accept Cookies
give us a call - 01642 267012
10% off your first order
Free UK Delivery
Turntableworld Museum 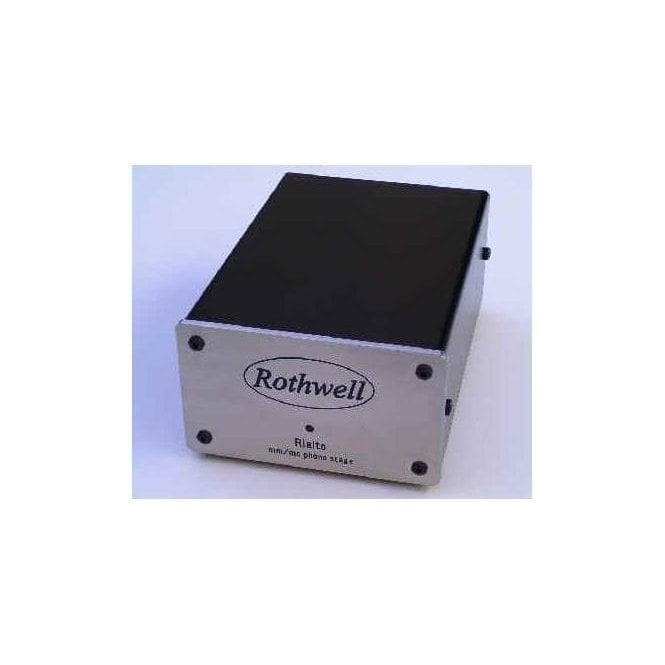 The Rialto is a phono stage pre-amp compatible with both moving magnet and low output moving coil cartridges. Discrete transistor circuitry is used throughout for maximum fidelity and lowest noise, and audiophile polypropylene capacitors are used for both the RIAA equalisation and signal coupling.

Although this is Rothwell's first new phono stage for several years, phono stage design is nothing new to them. The first phono stage to bear the Rothwell name was designed as far back as 1989 and was debuted at the London Hi-Fi Show of 1990 (it was an expensive valve design with many of the features subsequently adopted by other manufacturers, like a large outboard power supply and selectable cartridge loading). Since then there have been solid state moving coil and moving magnet designs from Rothwell, some sold as Rothwell products and some designed for third parties. More than twenty years of design experience has lead to an understanding of what really makes an impact on sound quality and what merely looks good on paper (or indeed just adds to the cost). The goal when designing the Rialto was to achieve high-end performance without the high-end price tag. To this end, every effort was put into maximising sound quality and everything that has no bearing on sound quality was sacrificed. For example, the ability to switch between MM and MC modes of operation via an external switch might be convenient, but internal switches allow the signal path to be kept as short and direct as possible, so internal switches are what were chosen.
There's even a separate switch for each channel to keep the left and right signals separate and signal paths short. The gain and input impedance for MM and MC operation could have been made adjustable, but that would have been an unnecessary expense for virtually no benefit in terms of sound quality, so fixed values for gain and input impedance were chosen (42dB and 47k for MM, and 62dB and 100 ohms for MC). The budget saved on unnecessary adjustability is better spent on power supply filtering - seven stages in total are used in the Rialto to maximise channel separation and inter-stage separation. Even the power on/off switch was deemed unnecessary since the total power consumption is so low (less than most domestic equipment in standby mode).
The result is truly audiophile sound quality at a very affordable price.
Although op-amps can give excellent performance and certainly boast impressive specs, they aren't designed specifically for the ultra low signal levels of moving coil cartridges which are typically in the region of a few hundred microvolts. The lowest level signals which an MC phono stage has to handle can be less than a single microvolt (the tail end of the reverb is 60dB below the peaks), and signals this low are best handled by circuits designed for the job. It's a little known fact that op-amps have class AB, or even class B, output stages which rely on large amounts of negative feedback to minimise crossover distortion. Having a class AB output stage allows an op-amp to swing large signal voltages into low impedance loads whilst maintaining modest quiescent current drain, and although op-amps excel with input signals of 20 volts or more where residual crossover distortion from their class AB output stages pose no problem, handling signals of a few microvolts is another matter. So, discrete transistors were chosen for the Rialto. The moving coil gain stage is based around low noise discrete transistors and designed to amplify the delicate signal produced by a moving coil cartridge with maximum care, operating entirely in class A to eliminate crossover distortion without resorting to negative feedback (there is no crossover distortion in a class A amplifier whether negative feedback is used or not).The moving magnet section of the Rialto also uses discrete transistor gain stages.
A moving coil phono stage typically has a gain of about 60dB, but due to the RIAA equalisation curve it actually has more like 80dB at the low end of the audio spectrum. 80dB is huge amount of gain and is best spread over more than one gain stage. Many designs employ two gain stages, but the Rialto has three to allow each gain stage to operate with optimum performance. Each gain stage uses just two discrete transistors and employs local feedback to achieve extremely low distortion. The high linearity of each gain stage means that overall global feedback (widely acknowledged to be good for achieving good THD figures but bad for perceived sound quality) can be eliminated.
The Rialto uses a passive circuit to create the RIAA curve (accurate to better than 0.5dB) and employs multiple audiophile grade polypropylene capacitors which not only allows non-standard capacitance values to achieved (to obtain the accuracy in the RIAA curve) but also to act as mutual bypass capacitors, minimising ESR (equivalent series resistance) and maximising audio performance.
The transistors too are audiophile devices, carefully selected for maximum fidelity and minimum noise. Different transistors are used in the moving magnet section of the Rialto and the moving coil section so that both moving coil and moving magnet cartridges are amplified by gain stages optimised for their specific requirements.
Low noise cannot be achieved merely by using expensive components. The circuit design has to be right and the circuit board tracks have to be very carefully routed. Both these aspects of design have been meticulously addressed in the Rialto so that background noise is as low as possible. The power supply goes through seven stages of filtering so that the circuit is operating from a perfectly clean voltage supply, allowing the music to appear out of silence, unsullied by residual hum, buzz and hiss.
Don't be fooled by the Rialto's affordability. This is a top-flight phono stage.
Technical Specifications:
Code:

We endeavour to despatch same day for orders placed up to 12 noon on available stock items (items with stock message "Usually dispatched within 24 hours"). Please remember to check with us first for a physical stock check if next day delivery is important to you. Any items with stock message "Usually dispatched within 72 hours" are items that we do not hold in stock but order in from the importer or manufacturer as soon as a customer order is received. Occasionally these may be delayed beyond 72 hours due to importer/manufacturer stock levels but we will inform you as soon as we can if this is the case.

UK ORDERS:  We despatch the bulk of our UK mainland items on a 24 hour service – Free of Charge.  Non Mainland locations - Isle of Man, Isle of Wight, the Scilly Isles, the Scottish highlands and Islands, the Channel Islands and Northern Ireland may take a day or so longer and are not Free of Charge. Smaller items are delivered using Royal Mail recorded delivery or special delivery. Larger items are delivered using a courier service such as Interlink Express, DPD, UPS or DHL.

INTERNATIONAL ORDERS: We offer competitive rates which can be confirmed by email. Please just ask – we will need a full delivery address and telephone number. Smaller items are delivered using Royal Mail Small Packets Airmail with International Tracked and/or Signed depending on value of item and availability of the service. Larger International shipments are sent by insured and tracked services using DPD, DHL or UPS. If there are any delays due to specific customs regulations, etc, you will be contacted by Turntableworld or by the courier with a request for any further information required. Customs duties do not apply for shipments into any EU country (for a full list please refer to the EU Country List). Customs duties can apply for countries outside of the EU. Customers in these countries are responsible for all taxes and duties incurred when the items enter their country.

COLLECT IN STORE OR HOME INSTALL:At the request of the manufacturer some items cannot be supplied by mail order but you can click and buy them and then elect to collect them from our store or arrange a home install (if applicable). Applicable items clearly state that they are Collect in store or home install. Once ordered you will receive a message prompting you to contact us by phone or email to arrange for us to deliver and install or to reserve and collect from our store at your convenience, you will also be advised of the delivery time / stock availability as not all Home install / collect in store items are held in stock.

Be the first to review Rialto MM/MC Phono Stage. Write a review ›
Ask A Question
Tell A Friend
Add To Compare
?
Compare (1)
Top